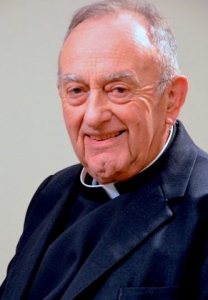 For this Mission Minute, I had the pleasure of chatting with Fr. Frank Wittouck, SCJ, who spent 13 years bringing the sacraments – and volunteers – to Texas inmates.

Tell us a little about yourself and how you found yourself ministering to inmates.

I belong to the Priests of the Sacred Heart Order, and for a time was stationed in Raymondville, Texas, near the border. There were four prisons in the town. One of the priests working in the parish was dying of cancer but was still active in prison ministry. The diocese had hired someone to be a chaplain to the inmates, but for some reason no one ever really saw the guy. I told the priest struggling with cancer – Fr. Chuck – “You shouldn’t be doing this, you’re sick!” Then he did something that totally surprised me – he quoted Matthew’s Gospel: “When I was in prison, you visited me.” This went through me like a thunderbolt. A few weeks later, he came back to our retirement house and said Mass once in a while at the prison. I eventually went to the prison myself and it really moved me. It genuinely helped my priesthood.

It gave me a renewed respect for the priesthood, and actually helped me respect my own priesthood more. These fellas are like, “Father this, Father that,” and really look to me for guidance and help. I’m an extrovert, so I yak a lot. (laughs) Their appreciation of me as a priest has really helped me to better understand what it is I do.

I say Masses and hear confessions, but of course I depend on lay people to do the RCIA and other counseling.

Any changes you’ve seen in yourself?

I’ve grown to have tremendous respect for these incarcerated guys. I was an Army chaplain for 20 years, so naturally I understood the realities of a rule-oriented environment, which one finds in the Army but also in prison. I never realized it till just this very moment, but I was the stockade chaplain both in Korea and in Ft. Hood, so I guess my prison ministry experience started even earlier than I thought. (laughs) Working with inmates has helped me be more patient, more tolerant, more positive. I don’t lecture them or anything – but I also don’t feed into their complaining, which there is, understandably, a lot of. I smile a lot. I have a habit of greeting the inmates with a smile and “Good morning.” Prison ministry helped me get out of myself. I actually looked forward to Saturday mornings, getting up at 5:30, and driving an hour or two to a facility and spending time with the inmates.

Do you have any heroes in prison ministry, anyone who inspired or mentored you?

Fr. Chuck Kelly, the priest I mentioned earlier. He died of cancer shortly after talking to me. His patience in suffering was a tremendous example for me. He was a good man who exuded goodness.

Just one: because of COVID, we were no longer allowed in the prisons, and during this time my Order moved me back to our monastery in Milwaukee. Meaning, of course, I couldn’t say goodbye to the inmates I’d been visiting.

What do you think are the most important things to keep in mind when visiting the imprisoned?

Respect for the men is what’s most important. And a sense of humor most definitely helps. I would also stress the word presence. Be a presence to those behind bars. I went consistently, and they knew I’d be there once a month. A volunteer can be a true point of reference for an inmate, a presence they can rely on in an environment where so much is uncertain.

Is there anything that you think most people would find surprising about prison ministry?

How simple the guys are. That’s something that surprised me. I think I expected inmates to confess big, dramatic sins – but no, they’re confessing, “I stole bleach from the laundry to wash my own clothes.” These are just simple guys struggling with life. And they can be surprisingly thoughtful. I got a group of nuns to come in for about a year to pray the rosary with the guys. There was this one Sister from Guatemala who was very, very short. When she sat in the chairs we arranged for the rosary, her legs couldn’t reach the floor. Some of the inmates brought over some books to stack so she could rest her feet on them.

What is your connection to Dismas Ministry?

A couple of years ago, I attended their conference in Milwaukee and was really impressed. It was a great conference. And of course the materials are terrific. The lay volunteers would use them while I would bring the sacraments and say Mass.