The St. Dismas Award is given annually, by Dismas Ministry, to persons in recognition of their outstanding service to the incarcerated.

The Board of Directors of Dismas Ministry is pleased to announce the recipient of the 2023 St. Dismas Award. Toni Jordan will be presented with the award in spring 2023 at a special event in St. Louis, MO. 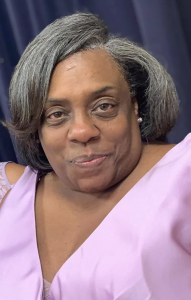 Jordan has been an advocate and champion for incarcerated women and those rebuilding their lives after their release from prison. She currently serves as the Women’s Support Coordinator with Criminal Justice Ministry, an agency that supports and empowers those impacted by incarceration.

An addict for more than 20 years, Jordan knows hardship and struggle from her days of living on the street. She was arrested for shoplifting, which she did to support her drug addiction. Jordan’s life focus changed when, just 10 days into her prison sentence, her mother died. It was the wake-up call she needed to choose a different path for herself.

In the recommendation from the award committee, Board Member Loretta Walters stated: “Toni is a remarkable woman. She battled her drug addiction for many years until it caused her to end up in prison. While in prison, she realized she had hit rock bottom and needed help. She started going to church while incarcerated and found God. He was her answer. She committed herself to Him and vowed that, when she was released, she would help other women get through the struggles of drug addiction. She has worked with women in prison, and those who have been released, ever since.”

Jordan knows well the road many of these women have traveled. Her dedication to help women living on the margins is rooted in her own story, and the resilience and resources, that she knows, it takes to make a new life.

“God brought me through the journey and all the trials, tribulations, and adversities, and now it’s my time to give back,” said Jordan.

The St. Dismas Award is given annually, by Dismas Ministry, to persons in recognition of their outstanding service to the incarcerated.

Each year, the award is presented to the recipient at a special gathering in their home state on or near the Feast of St. Dismas, March 25.

2021 – program suspended due to the pandemic

(A posthumous honor and award in Fr. Chris’s name was presented to the Order of Friars Minor, Sacred Heart Province.)

Thank you for your committed service to our brothers and sisters behind bars!  We are grateful to all individuals who contribute their time and talent to this important ministry.

If you have any questions about the St. Dismas Award or the nomination process, please contact us at dismas@dismasministry.org.