This week I’m happy to interview my good friend James, who on February 8 was released from prison after 22 years. We met during our time at Nash Correctional in North Carolina, where we worked in a large print plant that produces all manner of material for the state. James is, among other things, a wiz with car-sized offset printers, a prison convert to Catholicism, and a grateful beneficiary of Dismas Ministry’s work. 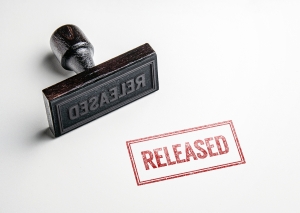 James, it’s so good to talk to you again. You’ve just been released after 22 years in prison. Feeling a little shell-shocked?

What strikes you as different now? What are some of the first things you noticed?

Well, smart phones didn’t exist when I got locked up. A friend just bought me an iPhone and I’m still trying to figure it out. (laughs) Google was still months away from being founded. Facebook didn’t exist. There was no online banking or Netflix. The technology is just very different now. I’m trying to figure out the dos and don’ts of applying for jobs online. Back then, you just went in and filled out an application with a pen.

Does society itself seem any different?

People seem more…I don’t know if “reserved” is the right word, but they’re definitely different. People don’t seem as approachable as they once did. There’s more of a noticeable distance now.

You converted to Catholicism while in prison.

I entered the Church on June 19, 2012. I had already been baptized as a protestant, so when I became Catholic, I received Confirmation. And you were there.

Yes, at the Nash Correctional chapel. I got to see you and our friend Brian enter the Church that day. We actually had quite a few conversions at Nash. What led you to convert?

I was doing a lot of soul-searching, I’d always had certain doubts about my faith tradition, which was very fundamentalist and harsh. I wouldn’t look into Catholicism, though, because I still retained a lot of anti-Catholic beliefs from my upbringing. And in prison, as you know, I was receiving a lot of extremely anti-Catholic material…

In prison, mail call is more or less a public event. Everybody gathers round and the officer hands out the letters and magazines. And you’re right, I did notice the stuff you were receiving…

(laughs) At a certain point, though, I decided I needed to be real about things. I had met a few Catholics in prison, you among them, and started asking a lot of questions.

I remember you coming to my cell and asking if I had anything explaining how to pray the rosary.

Yeah, and I think you were kinda skeptical about my reasons, because I didn’t give any. You could see the magazines I was getting in the mail, and it’s not like I explained to you that I was actually thinking of converting.

No, you really shocked everybody. So what’s different now? How has your view of reality changed since entering the Church?

I really love the fullness of it, the completeness of it. Before, it was just me and my Bible. But now…there’s this huge companionship, the communion of saints, the Church. It’s like the ceiling of the Sistine Chapel. If you want, you can just focus on God reaching his finger out to Adam; or you can step back and get a broader view of all of salvation history and realize you’re a part of it. Catholicism is that broader view. 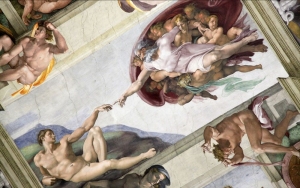 Was Dismas Ministry helpful in attaining this broader view?