For this week’s Mission Minute, I sat down – via Zoom – with John Hallinan, who ministers to inmates in Anchorage, Alaska.

Q: Tell us how you found yourself in prison ministry…

John: In March of 2016 I got involved with the Society of St Vincent De Paul. It helped me learn about realities I knew nothing about before – the reality inside people’s homes, which is different from just seeing people at church. You see up close the difficult situations. To be blunt, you see the brokenness: dads who have walked away, moms who can’t make the rent, children who are struggling. 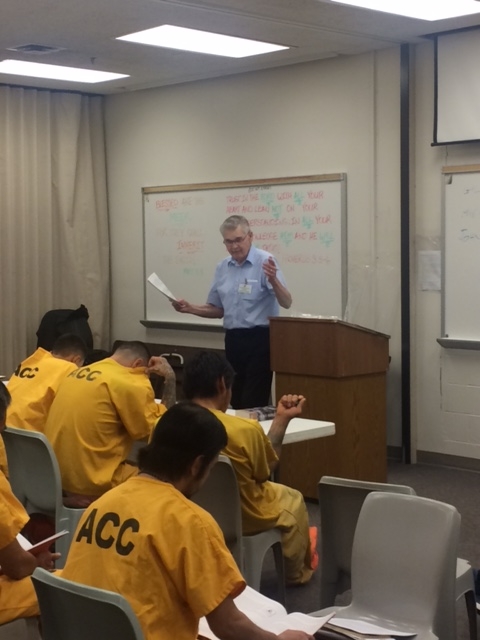 And prison is another reality that I knew nothing about. I had been helping at the parish with RCIA, when one day I was asked to accompany Deacon Dave to the Anchorage jail for a communion service. I really didn’t know what to expect. As I walked into the facility, I had images of Shawshank Redemption and other movies floating around in my head. But that wasn’t the reality I actually ran into. It was impressive. There were maybe 15, 16 inmates who came for the service. I remember at one point there was a guy who was being slightly disruptive, making comments. The other inmates made known their disapproval. In fact, one inmate came over and sat down next to the guy being disruptive, quietly letting him know that his behavior was inappropriate. And the rest of the service went smoothly. I just remember the men being so grateful for our presence there. I received the most heart-felt gratitude from them.

It really is the forgotten ministry.

Q: What is your experience with Dismas Ministry?

John: Dismas Ministry is like an axle: it keeps things turning and moving. It has great programs that are used in various jails and prisons. And in fact, it was their programs that first helped us. We had developed an in-person Bible study there at the Anchorage jail; but this being a jail, we had to deal with inmates receiving their final sentences and being shipped out to state prisons. The guys wanted to continue their studies and we had to find a way to help make that happen. I reached out to Tyler, and she was kind enough to send me a box of Bibles and studies, which I passed on to a deacon who was ministering at one of the state prisons. Now, though, we’ve worked it out so that when guys transfer from the jail to a state prison, they can contact Dismas Ministry directly and receive their studies that way.

Q: What do you think are the most important things to keep in mind when visiting the imprisoned?

John: Prison ministry is like life: you start slowly and gradually learn. I taught my granddaughter how to ride a bicycle, but before that it was a tricycle, and before that it was a wagon. Now, of course, she can out-bike me! (laughs) Prison ministry is much the same: a gradual learning process. You have to roll with the rules you’re given by the facilities. You – we – just need to keep going. We need to help smooth the path so people can come to Christ. Everybody sees this big intimidating freeway ahead, and they need a nice gentle on-ramp to access it.