With God, All Things are Possible

A Conversation with Joshua Stancil

We are blessed to have Joshua Stancil serving on the Dismas Ministry Board of Directors. A writer and multi-media specialist, Joshua is passionate about his work. He supports the mission of Dismas Ministry, and other nonprofit organizations, by sharing his gift of storytelling. As a public speaker, he humbly shares about his life – which includes time served in prison – with adults and young people in faith-based and school settings. While his life changed course, due to his incarceration, he embarked on a renewed faith journey. Joshua’s story is inspiring and gives hope to others who seek a new path, and a positive future.

Q: How did you live and grow in your faith life behind bars? 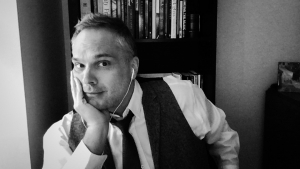 JS: At first it was extremely difficult. Prison has, thankfully, progressed from the days of rock-pile hammering; nevertheless, the experience is emotionally and spiritually crushing in ways that are difficult to describe. Plus, being a Catholic inmate in a Southern prison presents challenges of its own. There’s a well-known cultural bias against Catholicism, but there’s also another, less well-known geographical problem: your prison may be in a county that has no Catholic parish and thus no priest. Christ was very merciful to me and arranged one of those miracles only He can bring about: I met – quite unexpectedly – some people with the Catholic movement Communion and Liberation. I’d written to them in hopes of ordering a book by their founder, Monsignor Luigi Giussani, whom I’d seen excerpted in Magnificat. They sent me the book, then asked if they could drive down from Washington, DC, to visit me. To be honest, I thought the request was a little weird. But…I’m from the South, so of course I felt the need to be polite and say yes. To my surprise, we quickly became friends, and they accompanied me – through visits and letters and phone calls – during the final 12 years of my sentence. And we’re friends to this day. They helped me understand the Church as companionship, as the continuation of Christ’s physical presence in history.

Q: Were Dismas Ministry materials available to you during your time of incarceration? If so, which publications helped you on your faith journey?

JS: I didn’t discover Dismas Ministry till relatively late in my sentence. The God With Us and A Reason For Hope studies were tremendously helpful, though. There’s a rather stunning dearth of Catholic resources for inmates, which is why Dismas Ministry’s work is so vital.

Q: Were you raised Catholic or did you convert to the faith while in prison?

JS: My family was nominally Protestant, but for most of my childhood we only went to church for weddings and funerals. My parents divorced and remarried other people, and it was at that point – around age 13 for me – that we started attending church on a weekly basis. My brother and I enrolled in Sunday school and a year-long confirmation class, at the end of which we both were baptized. For some odd reason, following our baptism, my parents gradually stopped attending. I was too young to drive and attend on my own, but I still felt a religious pull, so I checked out lots of books from the public library. Unfortunately, with no one to guide me, I found myself unable to discern between the truth-claims of the various Christian denominations and soon grew frustrated. By the time I graduated high school, having traveled from Methodism to fundamentalism, I discovered I was now a thoroughgoing agnostic.

The religious question still nagged me, though, and in college I took a number of classes with names like “Modern problems of Belief,” in which we read Nietzsche, Camus, and the Book of Job. My second year of college brought me a great new roommate, Richard: a freckled redhead with an alarming stutter and a fundamentalist’s bias against the Catholic Church. We’d stay awake late into the night, debating the issues of the day. Whatever his position, I’d take the opposite just to poke at him a little. We had a lot of fun. But whenever he started criticizing the Catholic Church, I honestly had no idea how to respond. I started spending a lot of time in the campus library, studying the Church’s history and teachings, just so I’d have responses to Richard’s arguments. After a few months of this, I started to think, Hmm, I might be on to something here. I eventually sought out a priest, took instruction, and entered the Church in 1992, four years before my arrest. The collapse of my life had not been preceded by the collapse of my faith. I had never stopped believing everything the Church taught; but neither had I ever really let it invigorate my life. From the start, my faith had been wholly cerebral. With prison, though, and the companionship of many friends, it became a lived experience.

Q: In addition to serving on the Dismas Ministry Board of Directors, are you engaged in any other volunteer work on behalf of prisoners?

JS: Right now, my friend James – a former inmate himself – and I are in the process of trying to start a new halfway house in North Carolina. Transitional housing is difficult to obtain for many of the newly released, especially those who are subject to an ever-expanding array of residency restrictions. This is a long process, but we are committed to it.

Q: How can we – all members of the Church – help support those ‘inside’ and ex-offenders on their faith journeys?

JS: Supporting organizations like Dismas Ministry – through prayers, donations, and volunteering – is a great start. The need is simply huge. But I would also encourage people to see what their parishes are doing. Is there a jail ministry of some kind? If there is a jail or prison in your community, reach out to the chaplain there and ask about becoming a volunteer.

Q: What would you say to encourage others to learn more about “visiting the prisoner”?

JS: Next time you go to confession, really think about the implications of the sacrament. Christ didn’t have to institute it. He could’ve arranged to wipe our sins clean through baptism and then leave us to white-knuckle it through the remainder of our lives. But He gave us this sacrament, and the implications are profound – and comforting. We’re going to fall. We’re going to sin, and often grievously. But our sins don’t stop Him. He visits us in the prison of our limitations and weaknesses, and He assures us that we’re forgiven, that we’re still His. I think the more we appreciate the sacrament of confession, the more we’ll see ourselves as fundamentally united to men and women in prison.

Joshua Stancil is a Dismas Ministry board member, a published author, and a native of North Carolina. A frequent speaker at restorative justice conferences in both America and abroad, his writing has appeared in Magnificat, Traces, and Convivium. Joshua is the author of the Dismas Ministry blog series, Mission Minute: Profiles in Prison Ministry, found at dismasministry.org/blog. He can be reached via joshua.stancil@drm.media