The following blog post was written by a female inmate for Volume Four of the I Am Beautiful book series. The question she asks, “Why did I stay?” is a common thread that runs through many, if not most, of the stories throughout this book series. Numerous incarcerated women have suffered significant abuse.

The writings throughout this book series are the original work of the brave women inmates who courageously submitted their stories and art. Our goal is to present their work in their voice.

Why Did I Stay?

As I grew up, I learned not to speak up about the unpleasant. I tried to be nice, good, patient and long-suffering. So, when I married, I endured the verbal and emotional abuse, but I finally came to understand how as a victim, time after time I drank a toxic drink that my spouse mixed for me, that fooled me because it tasted like love at first.

For years I hid my suffering from others. No one guessed the ongoing sadness I felt. I recall the shock I felt after the wedding when I was abused for the first time. I couldn’t believe that someone who said they loved me would be so mean. Finally, with the help of a dream that stayed with me during my waking hours, the bitterness, sadness and anger I kept inside came to the surface. I realized that I needed to face that what my partner did to me for so long was abuse – emotional, psychological, and sometimes physical. Part of the struggle was the internal voice that said, “Don’t dig up and expose all this – it’s not nice. What’s the point, it’s in the past?”  But for the sake of my own healing, I had to vomit it out of my system.

The hard question was: “Why did someone who said they loved me, hurt me?”

I didn’t understand why love came mixed with the bitterness of mistreatment. The question that follows was: “Why did I stay and put up with it for so long?” Where was my self-respect? Why didn’t I claim the dignity that was mine as a human being?

I was angry with the other person for abusing me, but also angry with myself for going along with it. I could understand that my spouse learned to be an abuser as a child at the hands of dysfunctional parents. After all, I learned from my parents to be nice, not speak up, and suffer in silence. Yet, I also realized that forgiveness is the way out of living with toxic waste, a bitterness that would ruin my own life. But for that I needed God’s help if I was to accomplish what felt impossible.

I realize now that why I didn’t leave was because abuse came gift-wrapped in love. That‘s the part that is so sad – that abuse is mixed with what appears to be love. The bait is love because as human beings we are wired to receive and give love, but we can be fooled at first. We may not be wise or strong enough, or think enough of ourselves, to let go of the bait and walk away. So, I also have to forgive myself and be determined to never, ever succumb to such abuse again, to say to myself “That toxic mix? I’m not drinking that, I deserve better!”

This was written by RE, an inmate,  for the “I Am Beautiful” book series Volume 4. 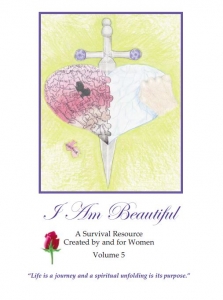 The I Am Beautiful project represents the personal contributions of women inmates across the country who sent us their writings and art regarding their experiences of abuse.  This work is their personal writing and art.

The project encourages them to express their past experiences, their road to survival over abuse, and their opportunity to make a difference in the lives of other women in prison who have experienced indignity and violence at the hands of others, often from those who were supposed to love them.