The St. Dismas Award is given annually, by Dismas Ministry, to persons in recognition of their outstanding service to the incarcerated. The very first award was presented posthumously in honor of Rev. Christian Reuter, OFM.

Although in a hospital bed, Fr. Chris was doing what he did for many years – ministering to the incarcerated and their families. He died on June 30, 2018, following complications from back surgery. He was 79. 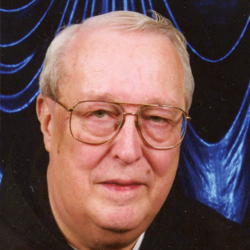 During the award ceremony on February 14, 2019, at the St. Anthony Friary in St. Louis, MO, Provincial Minister Rev. Thomas Nairn, OFM, told the family, friends, friars and representatives of Dismas Ministry gathered for the award ceremony: “When I went to see him in the hospital, he was still carrying on with the ministry. As I entered his room, I found him in bed talking on the phone with a woman whose son was in prison. He waved me in as he finished telling her: ‘I can’t visit him – I doubt they will let me out of the hospital. But I will find someone who can see him.’ He spent the next several minutes making calls until he found someone who would fulfill his promise.”

After being ordained as a priest in 1966, Fr. Chris served for 35 years in the Archdiocese of Chicago as a teacher and then, as principal of Hales Franciscan High School. Serving a predominantly African American Catholic community in the Archdiocese of Chicago, he was also the pastor of Corpus Christi Parish. This experience in the city of Chicago gave him a unique glimpse into the criminal justice system. “Church ministry in that environment often took me into police stations, courtrooms, prisons, and parole hearings,” he recalled.

Eventually, Fr. Chris decided to become involved in prison ministry, and in 2002 he arrived in East St. Louis, Illinois, to start his new work. When he first began in prison ministry, he was challenged by the grim prison setting, as well as bare prison chapels. Nevertheless, as he performed his ministry in the seven prisons of southern Illinois, he discovered that caring and respecting for prisoners brought light into an otherwise dreary environment.

He always kept in mind Luke 10:5, where Jesus teaches his disciples to say, “Peace to this house,” when they visit a home. Fr. Chris once shared, “I say it every time I pass through the bars and razor wire of a prison gatehouse.”

A few years ago, Fr. Chris and a number of lay and ordained prison ministers created Our Brothers’ Keepers of Southern Illinois, a reentry project to assist returning citizens when they leave prisons in the Diocese of Belleville.

“During my time as director of Dismas Ministry, he was a great mentor. I could always turn to him for help. He had a huge heart and that is where we found our common ground and our friendship. He listened to the heart of Jesus and truly cared for the outcast, marginalized and imprisoned,” said Ron Zeilinger, founder of Dismas Ministry.

According to Sr. Rose Rita Huelsmann, SSND, board member, he truly was a presence and an advocate for those in prison. He did his research and knew the justice issues.

Fr. Chris was beloved by many people, especially the friars, family and friends who gathered to celebrate his life and ministry to the poor.

Silence – I Am Beautiful Blog Series