My twenty years with the Federal Bureau of Prisons began with the supervisory chaplain telling me that inmates are people, too. They are humans, whose lives have value. His paradigm inspired me to understand that inmates are more than the offense for which they are convicted and that we share a common humanity.

This was in 1997, before we had access to computers. The inmate chapel clerks used typewriters, and we chaplains searched the chapel library in case the clerks were using the typewriters to prepare sports betting slips. I was among the first Catholic sisters to be hired as chaplains, because of the shortage of priests. We had transferable skills in education, ministry, and pastoral care.

At the federal penitentiary, I was the first woman to work alone behind the grill with inmates. The officers wondered if they could protect me, but after I wrote several incident reports, they realized that I followed the policies and procedures. I learned to set boundaries with inmates and to not cross the line of professionalism. I am their chaplain, not their friend. I provide a respectful presence, while coordinating groups of inmates whose interactions can be manipulative, creative, and challenging. As prison chaplains, we protect our own privacy, while also sharing the human condition of feelings, values, and beliefs.

Chaplains are trained in the major tenets of different faith groups, and we help inmates develop their faith by listening and guiding them in finding meaning in their incarceration. Catholic inmates and others sought my spiritual guidance. During my time in correctional chaplaincy, diversity increased among both staff and the inmate population. Diversity is both enriching and challenging. The bureau recognized and valued the diversity of the staff to correspond with the diversity of the inmate population.

Once, I overheard an inmate spokesperson of a non-Christian faith group correct a fellow inmate for using foul language in chapel. I privately thanked the spokesperson, after which he met with me regularly for spiritual guidance. I was blessed by his trust and openness. Chaplains promote and model respect for religious diversity.

When an inmate is angry, and then I become angry, there is the potential for violence. My growing edge is to de-escalate a volatile situation by honoring his feelings and stress. I seek to find goodness in each one, regardless of the wrong he has done. 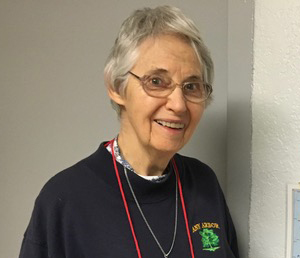 My friend and classmate in religious life was murdered in 1990, which gives me credibility in promoting nonviolence at every opportunity. Inmates have been both the victims of violence and the perpetrators of violence. I feel empathy for their trauma, while also motivating them to be peacemakers. Sometimes an inmate would learn that a family member was murdered, and I would counsel him. Seeking revenge would harm himself and his family, I would say – but he could honor the life of the deceased by seeking the listening ear of a trusted confidant. And if the inmate responded that he trusted no one, I would notify the staff to support that inmate in his sorrow.

Of course, religion can also be misused toward radicalizing and extremism. Chaplains received mandatory and frequent training and were occasionally the instructors, working with inmates to influence their faith group for peace and nonviolence. Training was required of all chaplains to recognize and deter religious extremism.

Reentry programs prepare the participants to return to family and society. Facilitating the reentry programs brought out the best of my transferable skills. Whatever we do to help inmates indirectly helps their children. Some inmates confided in me as they would their mother or grandmother. One day, an inmate saw that I was alone with an unstable inmate, distracted the unstable inmate and walked him out of chapel. We all may one day need the good will of another. I pray for protection.

Correctional chaplaincy provided relationships of privileged conversations with both staff and inmates. It is a challenge to be a skilled listener with persons of all or no faith practices, but these privileged conversations are gratifying and sacred. We all share a humanness within our diversity, regardless of whether we are inside or outside the fence.

This blog post was reposted with permission from the NACC and originally appeared in Vision, the newsletter of the NACC at
https://www.nacc.org/vision/may-june-2021/twenty-years-in-correctional-chaplaincy-sharing-humanity-and-setting-boundaries/