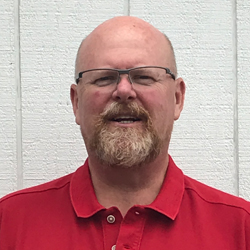 For most people, it might have been an ordinary Sunday in late summer. But, for Curtis Gibson, it was the beginning of his next chapter. It was the day he walked out of a minimum security prison in Oregon.

“I had a rough experience,” said Curt. During his four-and-a-half years behind bars, he went through a painful divorce and annulment of his marriage. Curt also lost both parents while he was incarcerated.

His mother’s passing was swift and unexpected. She contracted a virus and died just three days later. Curt’s father was losing his battle with
bladder cancer, and his remaining days were spent in hospice. A prison minister named Ariel Fauley had been visiting Curt throughout all of these
trials and helped him obtain the permission he needed to see his father one last time.

Shackled and wearing an orange jumpsuit, Curt was escorted to the hospice care facility to say his last goodbye. While waiting in an adjacent room to his father’s, he could hear the voices of his children on the other side of the wall. He was not permitted to see or interact with them. The room was cleared of all visitors, and it was only then that Curt was allowed to enter. He had just 20 minutes with his dad before being transported back to his prison cell to grieve in isolation.

“Prison wrecked my family and the people I loved,” said Curt. “But, I needed to go to prison. I was the ‘winner’ in this scenario. I was miserable, but it gave me time to pause and reflect on who I was and who I needed to be.”

While Curt was incarcerated, his three children experienced some turbulent times. His daughters moved out of their mother’s home. Curt’s son became addicted to heroin but is now, thankfully, seven years clean. “You don’t realize how far removed you are in prison,” he said. And, the pain of so much discord and loss is a heavy load to bear.

“Ariel was a friend to me. She was a rock. Ariel led me through Bible study and prayed with me. She listened and talked through things with me. I don’t know what I would have done without her,” said Curt. Ariel Fauley passed away in March 2021 after a long battle with breast cancer, and the loss of this friendship has had a profound impact on Curt.

Now that he has been out of prison for more than five years, he is eligible to go back as a prison ministry volunteer. He must meet certain requirements in order to be granted permission to volunteer, but Curt is determined to carry on Ariel’s good work ‘inside.’

“Ariel built up a pretty good ministry. I know firsthand the impact she made on me and others. I want to be able to pick up where she left off,” said Curt. “With her help and guidance, I was set on a new, positive path for myself and my family. There isn’t a day that goes by when I don’t think of her.”

For more than a year now, visits to prisons and jails have been banned due to the pandemic. This means that prisoners are even more isolated and forced to go without certain programs, services, and visits from loved ones.

Some prisoners have been very sick, and some have died as a result of the virus. “No visitors are allowed. Often, it takes a long time to get mail. Church services are suspended. All the things that kept me sane when I was in prison are gone,” he added.  According to Curt, there is no GED preparation, no Bible study or other classes. He believes it’s a rough situation for inmates right now.

“To say that ‘the punishment fits the crime’ is not fair,” he added. Those who are imprisoned have been denied opportunities to better themselves and have gone without ways to cope with the increased tensions and fears caused by the pandemic. Curt’s friends on the ‘inside’ report a lot of fights, guys sent to ‘the hole,’ and increased hostilities. This is in addition to dealing with the loss of fellow inmates who died from COVID-19.

Curt believes the resources provided by Dismas Ministry are so vital for prisoners right now. Receiving materials through the mail provides prisoners with something to read that stimulates them and leads them in a positive direction. “It’s all they have: a letter from a loved one, study material, a Bible,” he said. “What Dismas Ministry is doing is filling the void, and these faith materials mean so much to people.”

In reflecting on life after prison, Curt said: “I’ve been very blessed with my children, my career, my faith, and even some of the bad things I experienced. It took me a long time to get my life back on track, but I had a place to live, family support, and a friend who gave me a job.” 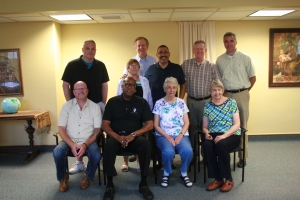 Curtis Gibson is a Dismas Ministry board member and a native of Oregon. He is often invited to share his story of incarceration, and re-entry experience through speaking engagements. Curt is the Controller and Fund Manager of Riggins Investments LLC, based in Clackamas, Oregon. When not working or volunteering, Curt enjoys spending time with his three adult children. And, he anticipates the opportunity to “pay it forward” by ministering to those behind bars.